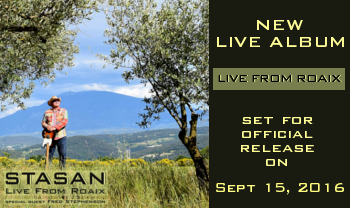 STASAN´s first live album "Live From Roaix" will be released on September 15, 2016 on the label megabien music.

All the tracks of this live album were recorded during an outdoor concert in May 2016 in Roaix, France. Besides ten original tracks of singer-songwriter STASAN, the album includes also two originals of British guest artist Fred Stephenson. Click here for more information about the album.

The full concert has been recorded (audio & video) by megabien entertainment for international distribution. The new live CD as well as  the concert DVD are available for purchase..